​Fields of Passion: Soccer in Brazil  by Danny Donuts Raudonis and Rodney "Chip" Daly © 2012, 100 pages, hardcover, over 150 photos. It's the ultimate soccer journey photo book from Chip and Danny's 2011 trip to Brazil. You'll feel like you've been transported to Brazil to experience the passion, pride and obsession!
​Was $30  On Sale Only $25

​
The Red White and Blues Brothers' Guide To The 2014 World Cup by Danny Donuts Raudonis and Rodney "Chip" Daly © 2014, 100 pages,
softcover. A humorous pocket guide written to turn the casual American sports fan into a passionate soccer supporter. Even though World Cup 2014 is in the books, there is still a lot of fun, informative and entertaining information packed throughout the pages. Think of it as a cheap souvenir, a keepsake, a collector's item.
Was $10, Post-Cup Sale Only $5!

​Crabby Road by Danny Donuts and The Pair of D's Band © 2009, A holiday-themed parody medley of the entire Beatles album. This album has gotten radio airplay on Chicago's Breakfast With The Beatles (WXRT) and nationally on The Dr. Demento Show!
$10

Wacky Winterland by Danny Donuts and The Pair of D's Band © 2005, A holiday-themed parody album featuring 5 Beatles parodies, 5 Christmas classics, a spoken-word piece and The Partridge Family in a Pear Tree.  This album has gotten radio airplay on Chicago's Breakfast With The Beatles (WXRT), WLUP, WGN and nationally on The Dr. Demento Show!
$10

​
​
Rolling With Donuts: Volume 1 with Danny Donuts  © 2009, It's TV's Quirkiest Travel Show! Danny and his cast of Hole-y Rollers set off in search of the wackiest festivals they can find. 4 episodes: Dropping of The Carp, The Rubik's Cube Championship, The Turkey Testicle Festival, The Cow Chip Toss and The Cartopia Car Art Festival are all featured along with outtakes, bonus footage and commercials produced by Danny Donuts.
Was $20 On Sale Only $15


T-Shirt
Danny In The Sky With Donuts while supplies last!
Was $20 On Sale Only $15 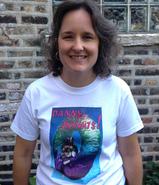