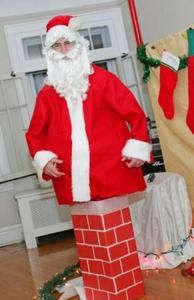 One smart dad came up with a cool new way to celebrate his daughter's birthday. He gifted a Danny Donuts performance to his daughter's school! The birthday girl got a party with ALL of her friends and the other classes benefitted from the show too. Best of all, dad didn't get stuck with cleaning up after a party!

Danny Donuts has been performing his family-friendly brand of positive comedy in schools, libraries, festivals and parties since 1999. He's performed his shows in Illinois, Indiana, Wisconsin, Michigan, Arkansas, Texas and New Hampshire. He can entertain just for the sake of entertaining or perform a custom-made show that's tailored to your educational or community needs! Danny's areas of expertise are

Danny's music comedy parodies have been a big hit at festivals for fans of all ages.
He can bring a band and perform live or sing to a pre-recorded track and perform as a solo act. For a special touch, a multi-media element is available as Danny often creates photo slide shows complete with lyrics that can be projected on a big screen. He also offers custom-made parodies to really make your event a memorable one!
​

The holidays have become about surviving the stress, and since laughter is a great stress-reducer, The Danny Donuts Christmas Music Comedy Extravaganza is the perfect antidote to get you Laughing All The Way through the holidays! Danny's Christmas songs have been featured on The Dr. Demento Show, WXRT's Breakfast With The Beatles, The Jonathon Brandmeier Show on WLUP and The Steve Cochran Show on WGN. Danny incorporates music, comedy, trivia contests, costume changes and props in his high-energy Christmas shows. He brings everything but the snow!

Danny will work with you and your budget to come up with a solution to your entertainment needs.